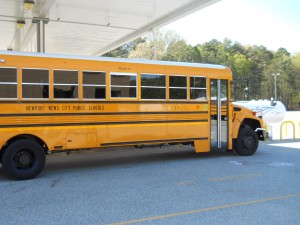 This month, Newport News Public Schools unveiled its new fleet of propane-fueled buses. How did we know? Because it’s in the news! We worked with the school district to develop a press release about their new fleet of 24 Blue Bird Vision Propane buses and craft a message to attract the media. A press release can shine a positive light on the propane buses you sell.

We all know that there can be politics behind the purchase of school buses, whether they are propane-fueled or not. “Selling” the idea of propane may be even more challenging after the buses are in operation. Carter Machinery connected us with the contacts at NNPS that we worked with to develop a press release that would show the community the positive benefits of its new fleet of propane-fueled buses.

By distributing a press release with a strong, clear and concise message, you control the tone. For example, this quote from NNPS’s press release clearly presents the benefits of propane as an engine fuel and the research that was done in selecting propane, thus backing up the reasoning for the purchase.

“Propane autogas is the best choice for Newport News Public Schools because it’s economical, safe, environmentally friendly and offers many bus maintenance advantages,” says Shay Coates, director of transportation for the school district. “After two years of attending trade shows, meeting with bus manufacturers, and talking with colleagues in school districts that operate alternative fuel buses, we knew this was the direction we wanted to pursue. The benefits of propane, in comparison to diesel, made it an easy choice for the school district.” 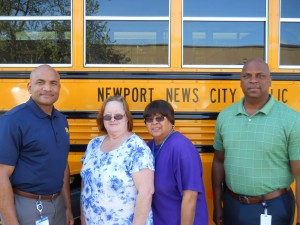 The NNPS press release also included testimonials from two drivers, which gave a more personal side to the purchase of the buses. We also provided the media with a photograph of the drivers. Here’s that excerpt:

In addition to providing cost savings, the new propane buses have positively impacted the district’s bus drivers. Rosalind McCauley, an 18-year veteran driver, says the new propane-fueled buses ride smoother and make less noise, allowing her to hear the students better. Driver Halle Washington says that the propane bus is so quiet that “at first, I wasn’t even sure if it was running.”

A press release doesn’t have to be “just the facts” any more. While the who, what and why are still important, it’s the specific message with a dash of personality that really catches the media’s eye today — and shines a bright light on the propane buses you sell.

Here are some of examples of coverage:

Q.  What has made you successful with alternative fuels?

A.  We are upfront about the cost savings with propane. We provide in-depth financial analysis that supports the significant savings that the customers will see with propane buses in operation.

Word of mouth is also key. We encourage our customers to talk with one another and refer us to other potential customers. Those types of referrals are huge! We find that because the buses perform so well, customers are excited to talk about their experience and promote what they’re doing. And that type of excitement is contagious.

We also get our propane demo bus out there. School districts are often skeptical until they actually get on a propane bus and drive it. They need to experience the differences, not just hear about them. It’s also the perfect opportunity to show customers how propane buses need a lot less equipment and aftermarket parts compared to diesel.

We also reach out to ROUSH CleanTech and Blue Bird’s alt fuels teams to help us sell because of their extensive product knowledge. This really shows our customers that we are the propane experts.

Q.  How do you introduce propane-fueled buses to prospective customers?

We have an alt fuels discussion with every customer every year — even if they only buy diesel. We talk propane at every opportunity. The potential savings with purchasing propane-fueled buses are so great that we’d be doing the customer a disservice by not talking alt fuels with them. If you’re not sure how to bring up propane to a diesel customer, wait until they bring up maintenance. That’s an ideal time to talk about the reduced maintenance time and costs associated with propane.

The propane fuel system technology used in the Blue Bird Vision bus is pressurized, and in order to service any of the internal tank components you need to evacuate the tank. The process of bleeding it down, especially when it’s cold, can take valuable time.

We’ve been hearing feedback for a while now that some kind of liquid withdrawal system was desired, to speed up the process of evacuating fuel tanks for service. So, our engineering and service teams have been hard at work reviewing many propane transfer systems, and now we are pleased to recommend the following three options for you and your customers. 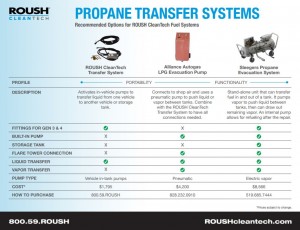 The ROUSH CleanTech Transfer System activates in-tank pumps to transfer liquid from one vehicle to another vehicle’s tank, or to a storage tank. This system takes advantage of the pumps already in the vehicle’s propane tank, supplying them with power during the transfer. The cost for this system is about $1,000. To order, call 800.59.ROUSH.

The Alliance Autogas LPG Evacuation Pump connects to shop air and uses a pneumatic pump to push liquid or vapor between your vehicle’s fuel tank and another vehicle’s tank, or to a storage tank. Combining this pump with the ROUSH CleanTech Transfer System will provide all connections needed and allow for fuel transfer even if the fuel pumps inside the vehicle are not operating. A pneumatic-powered pump connects to an air compressor that powers the pump, so no electricity is required. This pump runs just over $4,000. To order, call Alliance Autogas at 828.232.0910.

Sleegers Propane Evacuation System is a stand-alone unit that can transfer fuel in and out of a tank. It comes equipped with its own storage tank, so you can transfer fuel from the vehicle directly to the system, and the pumps on the Sleegers system use vapor to push liquid between tanks. Once the tank is empty of liquid fuel, it then draws out the remaining vapor. This vapor pump uses an electric motor to power a compressor, so access to electricity is required. The compressor creates pressure to force propane out of a fuel tank. When reversed, it draws out the remaining vapor. It is also equipped with an internal pump and fill nozzle for refueling from the storage tank after the repair. This system costs about $8,500. To order, call Sleegers at 519.685.7444.

We’ve included our propane transfer system spec sheet that provides more information. If you have further questions about these recommendations, please call us at 800.59.ROUSH.

They may look like ordinary school buses, but there’s a green sticker that identifies them as Blue Bird Vision Propane buses.  Newport News Public School District put 24 new buses on the road in February.  “In the long run we thought this was a great fit for Newport News,” said transportation supervisor, Shay Coates.  Coates said that the buses are cost effective and save schools nearly $20,000 a year between engine parts and maintenance.

Domestic Energy for Our Transportation Needs

Last month’s Boston Marathon reminded me that, much like this competition, our race toward energy independence is a marathon and not a sprint.

Jones’ is one of 24 new propane buses purchased by the school division. Twenty-one are the standard Blue Bird-built yellow buses, the exact same build as the past two bus purchases, while three others are special-needs buses, equipped with wheelchair lifts. A green sticker marks each one for its eco-friendly status.

Kledzik said Pasco County is paying $0.21 cents less for the district’s 45 propane school buses versus nearly 400 other diesel buses when calculating a the per gallon equivalent. Additionally, an alternative fuel excise tax and a $0.50 cents per gallon rebate have returned nearly $140,400 to the district over the past two years.

5.3.2017 — For more than a decade, Newport News Public Schools has increased its focus on environmentally friendly and practical actions that reduce carbon emissions and ensure energy efficiency. The purchase of 24 Blue Bird Vision Propane school buses supports this initiative by reducing nitrogen oxide emissions by nearly 30,000 pounds and particulate matter by over 760 pounds each year compared with the diesel buses being replaced.

Paulding County Changing The Way Students Get to School

Paulding County is changing the way children are transported to school…

Your Move: The Third Step to Propane Autogas

By admin@roushcleantech Blog, Fuel for Thought

Fleet owners looking to make a positive difference in their bottom line this year could find a partner in propane. Fleets that take advantage of propane autogas can cut operating costs by an average of 40 percent compared to conventional fuels. It’s a readily available, domestically produced fuel that also reduces emissions.