Could Driving With Propane Be The Key To Reducing Air Pollution?

In Fulton County, Georgia, students have been getting to school a little differently recently – even if they may not realize it. The county has rolled out hundreds of propane buses to take kids to school, switching over from previously-used diesel. Across the United States, school districts are becoming increasingly interested in making the switch after recent studies concluded that polluting diesel buses are having an effect on students’ health.

As of September, states have announced over $150 million in Volkswagen Settlement awards. These funds have deployed nearly 1,900 vehicles and construction / installation of over 600 electric vehicle chargers. Transit buses have seen the largest amount of investment of $55 million, while school buses have had the largest number of deployments of 990 vehicles.

We’ve had many successes with the EMT funding school buses fueled by propane autogas, such as in Lafayette, Louisiana and various districts in Nebraska. In Iowa, 100 percent of the applications seeking propane school buses were funded. And in Tennessee, 14 districts won funding to replace diesel school buses with alternatively fueled buses.

The Propane Education & Research Council’s new resource center offers in-depth information about propane school buses, including a state-by-state map with details regarding how to identify and apply for Volkswagen settlement funds. You can learn more about the benefits of propane autogas, how to accurately evaluate NOx reductions, and how to calculate the total cost savings for propane autogas. Remember, only $150 million of the $2.9 billion fund has been awarded. There is still a tremendous amount of opportunity out there.

Please contact Chelsea Jenkins at Chelsea.Jenkins@roush.com to discuss how best to approach and plan for the next phase of Volkswagen settlement (and other funding) opportunities in your state. Visit www.ROUSHcleantech.com/volkswagen-settlement for more information.

The district purchased three Blue Bird Vision Propane buses after researching various alternative fuels, including electric and compressed natural gas. “Our school board concluded that propane was the best price and fit for our needs,” said Steve Bradshaw, superintendent of Columbia Falls School District Six. “We are a cost-conscious community, and saving taxpayer dollars while reducing emissions is a priority for our school district.” 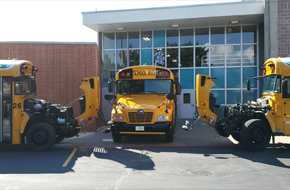 On average, propane autogas costs about 50 percent less than diesel fuel. Columbia Falls School District pays $1.08 for propane compared with $2.89 for diesel, a savings of over 60 percent. The district also will reduce its maintenance expenses since propane buses do not require costly and complex after-treatment systems required for diesel buses.

“Columbia Falls School District Six will experience noticeable cost and emissions savings with its new propane-powered buses,” said Ryan Zic, vice president of school bus sales for ROUSH CleanTech, the propane fuel system manufacturer. “The district’s drivers will also enjoy how quiet they are, allowing them to focus on the students and the road ahead.” Buses fueled by propane autogas reduce noise levels by producing less sound, resulting in about 50 percent less noise.

The district needed a plan to fuel the buses, but did not have space on its property to install infrastructure. The district signed a fueling contract with CityServiceValcon that built a propane fuel station near the school at no charge to the school district. The propane provider also trained the district’s bus drivers on fueling, which is as fast and simple to fuel as diesel buses.

“Montana winters can be brutal. With propane buses, there is no need to delay or close school in extreme temperatures because they start up and operate reliably in cold weather — up to negative 40 degrees,” said Zic.

This smaller purchase of three propane buses shows that any district — no matter the size — can adopt propane. Interested in promoting one of your propane bus customers? If you’ve got an intriguing story, let your ROUSH CleanTech sales representative know, and we’ll be in contact!

We recently collaborated with Superior Energy Systems on a case study with a new twist — more information about a customer’s experience with propane infrastructure. As with our other case studies, it also covers the school district’s experience with cost-effective propane buses. Here’s a summary of Henry County Schools’ testimony. 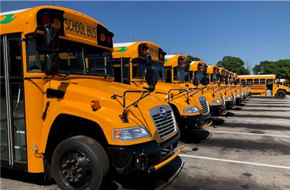 Henry County Schools in Georgia was concerned with bus maintenance requirements. This led the district to replace an aging diesel fleet with emissions-reducing propane autogas.

The district first purchased 14 gasoline-powered buses, then made the move in 2019 to propane models. Henry County Schools’ decision was supported by reports of positive experiences with propane from nearby Georgia school districts. The decision to go with propane was solidified when ROUSH CleanTech hosted a group of district staff at its facility in Livonia, Michigan. “Once district technicians visited ROUSH CleanTech for technical training, they were sold on the idea,” said the district’s transportation director.

With a limited number of public stations nearby, the district built a propane fueling station at its onsite transportation facility. Propane stations cost less to build than any other fuel source, including diesel, gasoline, CNG and electric. Superior Energy Systems provided the district’s fuel infrastructure, which included two propane autogas dispensers and an 18,000-gallon skidded tank. The company’s equipment was compatible with the district’s existing fueling infrastructure set-ups.

With the addition of propane buses to its fleet, Henry County Schools cuts harmful emissions and greenhouse gases, which benefits both student health and the community’s air quality. Clean-operating propane produces no particulate matter and extremely low levels of nitrogen oxides (NOx), and emits fewer greenhouse gases and smog-producing hydrocarbons. The district’s propane buses emit 500 fewer pounds of particulate matter per year and about 19,000 fewer pounds of NOx annually compared to the 23 diesel buses they replaced (which were 1995 to 2006 model years).

As propane buses roll out in Henry County, drivers are happy to make the switch. They received training on how to operate the propane buses and commented on the buses’ powerful engine. The schools’ entire transportation department expects the buses will be reliable for the long haul, and plans to switch all of its buses to propane over the next decade. 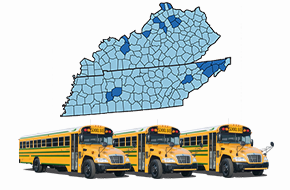 To begin the regional rally, Central States Bus Sales reps received a half day of training covering propane and its advantages for schools. Then, they split into five groups with folks from ROUSH CleanTech and Blue Bird. These teams visited 19 school districts over the remainder of the week, with 14 being conquest accounts.

Thank you to the Central States Bus Sales team for hosting and lining up the customer visits.

With tens of thousands of propane-powered commercial trucks in North America, chances are your fleet drivers pass a few on the road. What isn’t obvious is how those propane trucks produce much less harmful emissions than their traditionally fuels counterparts. And new propane engine technology take those numbers even lower.

The Power of Technology, People, Process in Your Operations

In this month’s NGT News Fuel Fact Check, Todd Mouw was asked if propane autogas can help fleets avoid the uncertainty of diesel pricing. Mouw unequivocally explains that this is true. He notes that the volatility of oil prices doesn’t impact propane as it does diesel because propane is a domestic fuel.

It has been a busy Summer at Roush. We have had more than 150 different public and private fleets tour our facilities to learn more about our advanced technology developments for transportation including propane, natural gas, electric and autonomous vehicles.