A  DIVISION  OF  ROUSH  ENTERPRISE

CLEVELAND (May 15, 2014) — Almost 50 buses fueled by clean-burning, affordable propane autogas will begin operation for the 2014/15 school year in the Cleveland Metropolitan School District. 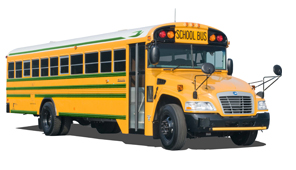 A short return on investment, the ease of fueling, the low infrastructure cost and the unexpected benefit of lower electricity costs were reasons cited by the school district for the purchase of the propane autogas buses. The school district annually estimates about $50,000 in electrical costs for powering block heaters to start their diesel buses in cold weather. Blue Bird Propane Vision buses start up in temperatures as low as minus 40 degrees Fahrenheit.

“Blue Bird is committed to providing school districts with reliable, innovative and efficient green transportation solutions that are also favorable to a district’s bottom line,” said Phil Horlock, president and CEO of Blue Bird Corporation.“Like many districts, Cleveland Schools did the research and realized that propane autogas is the best choice for reducing fuel and maintenance costs while providing cleaner air for the community.  This is a great decision by Cleveland Schools.”

The school district, which fuels all their buses at their bus depot, currently is adding an on-site autogas fueling station.  Autogas infrastructure is less expensive to install than all other conventional and alternative transportation fuels. On average, autogas costs up to 50 percent less than diesel.

The school district purchased the Type C school buses from Cardinal Bus Sales, Ohio’s Blue Bird dealer. Each bus is equipped with a ROUSH CleanTech propane autogas fuel system including 20 outfitted with wheelchair lifts. The buses are being delivered over the next two weeks.

In 2012, Clean Fuels Ohio recognized Cleveland Schools as a “three star green fleet” based on reductions in emissions and improved fuel efficiency. The new fleet of autogas buses will emit about 4 million fewer pounds of carbon dioxide into the environment over their lifetime.