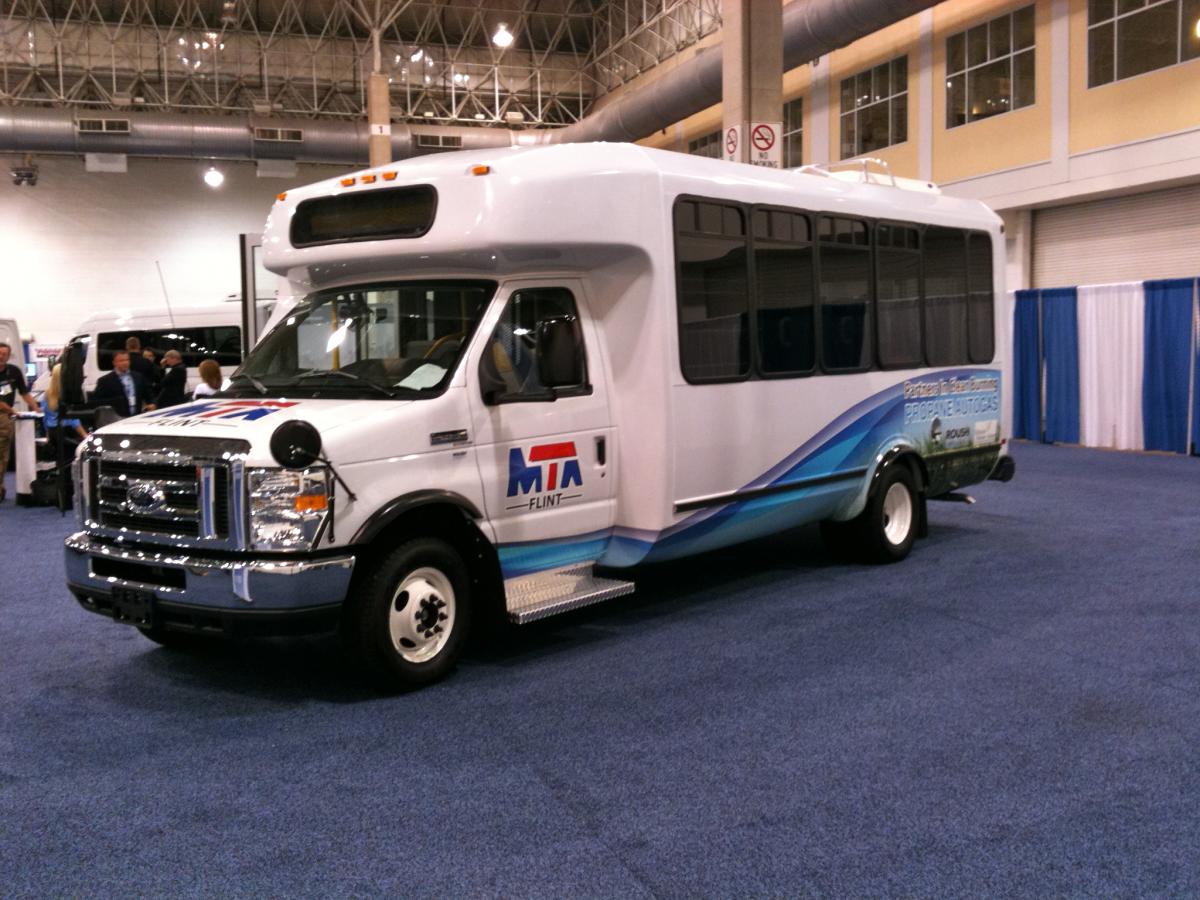 The shuttle on display will be in service by October, while a second propane autogas vehicle has already hit the streets, serving Michigan’s City of Flint and Genesee County. With the help of a $5 million federal grant, Flint MTA plans to add at least 48 more 16-passenger propane autogas shuttles to its fleet by early 2012.

The ROUSH CleanTech propane autogas buses, built on a Ford E-450 chassis, with a 6.8-liter, V10 engine and 41-gallon propane fuel tank, are part of the transit authority’s decision to become a leader in environmental stewardship and reduce costs to the areas it services.

“Propane autogas is a good fit for Flint Mass Transportation Authority,” said Edgar Benning, general manager of Flint MTA. “We anticipate purchasing propane fuel for half the price of diesel. It will reduce our dependency on diesel and drive down our cost of operation.”

By switching to propane autogas, which burns cleaner in engines than conventional fuels, Flint MTA’s fleet vehicles will sustain reduced maintenance costs and the potential for a longer engine life.

“We at ROUSH CleanTech are fortunate to be working with our neighbors at Flint MTA,” said Todd Mouw, vice president of sales and marketing for ROUSH CleanTech. “They are leaders in the movement to reduce our country’s dependence on foreign oil by researching and putting into action an alternative fueling station and by switching a large percentage of their fleet to propane autogas — all while cutting fuel costs by up to 40 percent and greenhouse gas emissions by up to 24 percent.”

Last month, Flint MTA broke ground to install an alternative fueling station in Grand Blanc Township that includes propane autogas. The first of its kind in Michigan, the station should be completed by 2012. In time it will be open to the public and have a community training facility for a variety of alternative fuels.

“Propane is a green alternative, and it’s a good fit because we don’t have to spend money on the infrastructure in our buildings to operate these vehicles,” said Benning. “For other alternative fuels like compressed natural gas and hydrogen, we would have to upgrade our maintenance facility.”

Lynn McClean, manager of maintenance services of Flint MTA, will be on-hand in BusCon’s Propane Autogas Pavilion today and tomorrow to answer questions.

About Flint MTA: The Mass Transportation Authority is the agency authorized to provide public transportation services in Flint and Genesee County. The MTA’s services include primary fixed routes, secondary routes (running only during designated times), dial a ride (known as “Your Ride”), specialized services for the elderly and persons with disabilities, and maintenance of the Greater Flint Transportation Center, Community Services Centers, Greyhound and Amtrak Rail Station in Flint.