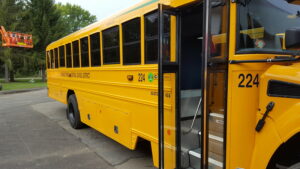 In 2011, Chenango Forks Central School District was faced with school budget cuts made across the state of New York. This spurred the district’s Board of Education to take a closer look at the district’s budget. They discovered that the annual cost for diesel fuel was alarmingly high, raising concern for a school district with three schools and 30 buses.

“With Chenango Forks Central School District’s budget being cut, it was time to thoroughly review our district’s costs line-by-line once again,” said Spyros Dimatos, school board president. “We couldn’t believe how high the annual budget line item was for diesel fuel. We needed a solution to reduce this cost. With research, we found relief with propane school buses.”

Chenango Forks Central School District’s savings come in the form of fuel costs. On average, propane autogas costs up to 50 percent less than diesel. In October 2018, the district paid $1.46 per gallon of propane compared with $2.16 for diesel. In addition, the district capitalizes on federal tax credits.

With propane autogas, no exhaust after-treatment or diesel emissions fluids are required like with diesel to meet today’s strict emissions regulations. Propane vehicles also don’t need particulate trap systems, turbochargers and intercoolers. Plus, propane uses less engine oil, For example, an oil change for a Blue Bird Vision Propane school bus uses 7 quarts compared with over 17 quarts for a typical diesel engine. However, since an independent contractor maintains the buses, the district doesn’t realize these savings.

Chenango Forks Central School District is located in a river valley and most of its buses have at least two routes with hills. “It’s imperative that our school buses maintain their power on hills. We weren’t willing to compromise performance. We’ve found that our propane buses have more power than diesel buses, giving our drivers confidence,” said Lloyd L. Peck, Ed.D., superintendent of schools. “In addition to the bus’s power, the drivers value the lower noise level, their quick start and warm up time in cold weather, and the fact that there are no unpleasant fumes.”

Propane buses have quieter engines. Vehicles fueled by propane autogas reduce noise levels by about 50 percent when compared to diesel, allowing drivers to focus more on the road ahead.

Due to the chemical properties of propane autogas, the propane buses warm up quicker and have had no cold start issues. These buses can start up in temperatures as low as -40 degrees Fahrenheit. “In January 2018, the diesel fuel in our last few diesel buses gelled,” said Bernie McDermott, transportation director. “But we were able to get our students to school without concern as we had propane buses that started right up.”

The district’s drivers received training from ROUSH CleanTech on how to operate the propane buses. The district also provides a propane autogas manual to all drivers, holds safety meetings as needed, and has existing drivers help train new drivers.

The drivers have expressed other differences, too. There is a short waiting time for the engine to start — typically 7 to 15 seconds, but may be up to 45 seconds depending on conditions such as engine off time. With liquid propane, once the ignition key is used, the liquid propane autogas system runs a fuel flush process, which takes longer than starting a conventionally fueled vehicle. And when the drivers fuel the propane buses, it is a different hookup that takes a bit longer.

Propane autogas is part of a close-looped fueling system, meaning the propane is never exposed to air and won’t spill during refill the way that gasoline and diesel can. However, fueling was the biggest challenge that the district had to overcome. “Until recently, there were no public propane fueling stations in our area,” said McDermott. “The one that now exists is still too far away to be useful as it takes 4 gallons of propane to travel to and from the station.”

Chenango Forks Central School District initially installed a 1,000-gallon tank located onsite at its bus garage next to existing pump stations. The fueling was slow. After a couple years they switched to a provider that was more knowledgeable about fueling propane buses. They replaced the tank and made other changes that increased refill time to 12 gallons per minute.

Recently the district added another 1,000-gallon tank to their station. They also are transitioning to the quick connect nozzle (often referred to as a Staubli) to make fueling simpler and quicker.

Knowing the hurdles of fueling with propane, the district allows a neighboring district with one propane bus to use its facility. Now when they discuss propane buses with other school districts, both Peck and Dimatos suggest propane station infrastructure be a part of the research and planning from the beginning. ROUSH CleanTech has helped hundreds of its customers find and partner with local fuel suppliers.