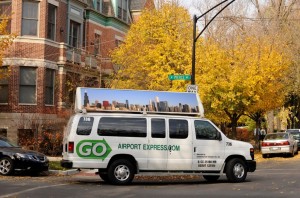 Founded in 1853, GO Airport Express began as a carriage service between train lines. The company has since evolved into a high-tech operation of ground transportation services including airport shuttles, group charters and convention shuttles. GO Airport Express’ mission to provide convenient and affordable transportation solutions has not changed throughout its long history.

GO Airport Express is currently the only company with the required certification to provide shared-ride services from Chicago’s O’Hare International and Midway airports. 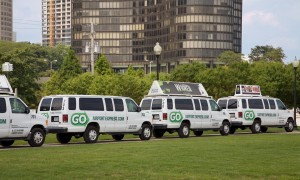 Robert Hann, vice president of marketing for GO Airport Express, was concerned that company profits would cycle back into overhead costs to pay for increasing fuel expenses. He needed a solution that would allow the company to remain competitive against local taxi providers.

“It’s been very difficult to increase our fares and keep our bottom line, so we’ve been really looking at ways to increase our margins,” said Hann. “When money is tight, such as in a down economy, companies begin looking for alternative methods to protect their financial stability and future.”

The company was determined to save money while reducing carbon emissions. They compared propane autogas (known as autogas) and compressed natural gas in the categories of range, infrastructure, and costs of vehicle conversion, fuel and maintenance.

“We needed an alternative fuel that would not only save us money, but decrease our carbon footprint without sacrificing performance and having zero effect on our passengers’ comfort,” said Hann. “After analyzing the return on investment, propane autogas was selected as our preferred fuel.”

ROUSH CleanTech worked with Hann and GO Airport Express to make sure that the autogas vehicles would meet and exceed the ground transportation company’s required criteria.

“Being located in Chicago, we were concerned about cold-weather engines starting in propane autogas vehicles,” said Hann. “ROUSH CleanTech suggested that we test drive various products that run on autogas. With the new autogas liquid injection technology, our concerns about cold starts were eliminated. The technology works.”

GO Airport Express’ propane autogas vans began operation in December 2011. They account for half of the company’s total fleet servicing downtown hotels. Since switching to autogas, Hann has been pleased with customer and employee reaction to “greening” their fleet. He even believes the switch has helped the company secure new business.

“We survey our customers and that seems to be a very important to them,” Hann said. “Chicago is a big convention town, so when we’re marketing to conventions, that’s another feather we can tout — that we have a green fleet. I think the conventions appreciate that as they’re looking for ways to go green.”

While the importance of a green fleet is not lost on Hann, the primary advantage is the impact to GO Airport Express’ bottom line. With their high-mileage shuttle vans averaging 300,000 miles in their lifetime, the savings add up quickly.

Hann estimates that fueling with autogas saves up to 50 percent on fuel costs. “The biggest reason to go to autogas is the fuel savings for us,” Hann said. “We love the green aspect and think that has a lot of environmental benefits. But when you look at gasoline prices in Chicago being $4.30 and $4.50 (summer 2013), and you can get autogas for less than half of that, it doesn’t take a lot to see how that’s going to pay off.”

About GO Airport Express: GO Airport Express, one of the oldest companies in Chicago, traces its founding to 1853 and the Parmelee Transportation Company, which provided a carriage service between Chicago’s railroad stations and the downtown hotels. It is a founding member of The GO Group LLC, the nation’s largest airport transportation provider, serving some 60 airports in North America, Mexico, the Caribbean and Europe and transporting more than 13 million passengers per year.

About PERC: The Propane Education & Research Council (PERC) was authorized by the U.S. Congress with the passage of Public Law 104-284, the Propane Education and Research Act (PERA), signed into law on October 11, 1996. The mission of PERC is to promote the safe, efficient use of odorized propane gas as a preferred energy source.