With a commitment to excellence and longevity of assets, Liberty Public Schools sought to replace aging, costly and high-maintenance diesel school buses with a fleet that would be friendly to the surrounding environment, the district budget and the maintenance staff. 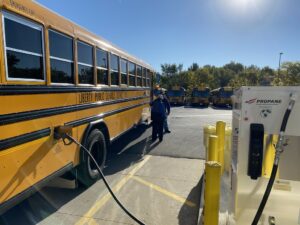 Liberty Public Schools is a 17-campus school district that sits just outside Kansas City, Missouri, and encompasses 85 square miles. The district runs 143 bus routes for 4,200 students daily, requiring the use of 88 school buses. In 2019, several of those buses were diesel models that were aging out of their lifecycle. In 2020, the district replaced 10 outdated diesel buses with propane buses, and an additional seven propane buses are on order for 2022 delivery.

When more than a dozen of the district’s diesel buses were approaching the end of their lifecycle, Jeff Baird, director of transportation for Liberty Public Schools, began researching replacement options. High on the list of qualifiers were cleaner-burning fuel, low maintenance costs and low fuel costs. During their research, Baird and his team learned that propane autogas engine technology is so advanced that harmful emissions are near zero, which is why it’s the most widely used alternative fuel for school buses.

After doing extensive research on ROUSH CleanTech’s innovative engineering, the district made the choice to purchase new school buses fueled by propane autogas rather than diesel or gasoline. Propane autogas school buses virtually eliminate particulate matter (black smoke) without adding maintenance burdens and extra costs to the fleet like diesel does.

In 2020, Liberty Public Schools purchased 10 Blue Bird Vision Propane buses powered by ROUSH CleanTech technology to replace outdated diesel buses. The district was able to equip the school buses with child safety seats in the first 10 seats so they are used not only for regular routes, but for special needs routes and field trips, too.

Invested in the Environment and Students

The propane school buses benefit not only Liberty Public Schools students and drivers, but the surrounding community since they significantly cut harmful emissions. Propane autogas is a nontoxic, non-carcinogenic and non-corrosive fuel. “Our leadership takes a responsible look toward emission control and is invested in lowering the carbon footprint created by district vehicles,” Baird said.

According to the U.S. Environmental Protection Agency, propane emits fewer greenhouse gas emissions than gasoline, diesel and electricity in a variety of end-use applications. In fact, 24 propane buses emit less nitrogen oxides than one diesel school bus manufactured between 2007 and 2010.

The health benefits extend beyond the environment. A Georgia State study correlated increased academic performance when children were exposed to lower levels of harmful school bus emissions. Student test scores improved in both math and English when alternative fuels like propane autogas replaced diesel. Baird added that “taking care of our students’ needs is top priority because they’ve sacrificed so much during the pandemic, and our propane buses help us do that.”

To measure budgetary success, Liberty Public Schools monitors the following metrics: gas mileage, reliability and repair costs. The current propane bus fleet drove 125,000 miles the first year, with a total fuel cost of $24,688. That same year, the district spent $81,250 on 10 diesel buses. The fuel savings when comparing diesel to propane autogas in the first year was $56,562. One of the reasons propane is so inexpensive when compared to other fuels is that propane is a domestic fuel. More than 90% of the U.S. propane supply is processed in the nation, with an additional 7% from Canada. In addition, Missouri has access to dependable propane supplies through six terminals statewide.

Baird said that “all savings go back to the classroom. The first-year fuel savings is enough to support one classroom teacher.”

Propane autogas makes sense for Liberty Public Schools’ commitment to maintenance integrity and asset longevity. The district’s propane school buses will lower total cost of ownership by saving on maintenance-related expenses and manpower. “We operate a fleet with the philosophy that we have good maintenance and solid preventative maintenance,” Baird said.

With the addition of propane buses, the shop earned the fleet excellence award given by the state highway patrol to districts that are excellent at maintaining their fleet.

In order to meet emission standards, today’s diesel buses require expensive equipment and high-maintenance systems, which aren’t required on propane buses. Diesel buses require components that need to be maintained, including diesel particulate filters, manual regeneration and diesel exhaust fluid, and other complex after-treatment devices. While clean diesel can be cleaner than pre-2007 school bus models by employing those complex and costly after treatments, propane is cleaner by its very molecular, low carbon composition.

“Our experience with ROUSH CleanTech made a big difference in our decision to purchase. They conducted initial training onsite and have a support system to guide our staff through mechanical challenges or to answer questions,” Baird said. As a result, the district’s technicians are onboard with the shift to propane school buses — enjoying the simpler powertrain and appreciating the elimination of diesel exhaust fluid.

When it comes to fueling propane fleets, there are three options. Some districts choose mobile fueling where a local propane supplier fills up buses directly from a delivery truck. Others fuel at public propane stations. However, Liberty Public Schools, like most school districts, installed onsite infrastructure for the convenience and low cost — a propane fueling station costs less than any other fuel type.

The school district partnered with Ferrellgas to install a 10,000-gallon fueling station onsite directly in the bus lot. Ferrellgas applied for and received a grant for the fueling station, saving the district $80,000 on the install. Liberty Public Schools also receives additional grant assistance that helps keep their price per gallon at $.79.

Propane suppliers specialize in helping fleets choose the right fueling option based on the fleet size, routes, budget and facility space. Baird said that the fueling has been easy to adjust to because the propane supplier provided certified safety training for all of the district’s employees.

To help offset the cost of the purchased of the buses, the Missouri Propane Education & Research Council (MOPERC) awarded $20,000 to the school district as part of MOPERC’s Clean Bus Replacement Plan, which has committed $1 million to help Missouri school districts transition from diesel to propane buses. The plan offers rebates of $2,000 per propane bus, up to 10 per district, at the time of delivery. “By helping Liberty Public Schools lower its acquisition cost of these propane school buses, the district is lowering its transportation operations costs with lower fuel and maintenance costs,” said Steve Ahrens, president of MOPERC.

There are also federal funding programs available, such as the Volkswagen Environmental Mitigation Trust and Clean School Bus Program, which are beneficial to help with the cost to replace aging diesel buses. The school district can also take advantage of the Alternative Fuel Excise Credit and Alternative Fuel Infrastructure Tax Credit, which have recently been extended for multiple years.

The drivers also found the performance better than expected: Buses equipped with ROUSH CleanTech’s propane autogas fuel systems retain equivalent horsepower, torque, towing capacity and warranty coverage as gas and diesel counterparts. “It took an initial adjustment period,” Baird said. “But now, the drivers like the new buses and do not want to shift back to a diesel bus.” Even with extreme weather, drivers reported that the propane buses performed just as well as other buses, including conditions such as snow, high wind and heavy rain. And, propane buses warm up quickly and have no cold-start issues on winter mornings.

The district’s bus drivers have reported a major reduction in noise levels. Buses fueled by propane autogas reduce noise levels by producing sound 11 decibels lower than diesel-fueled buses, resulting in about 50% less noise. The lower noise levels have improved clarity and communication between drivers and students, and it has helped with audio on bus monitoring systems.

As Jeff Baird reflects on what Liberty Public Schools was looking for when they replaced their outdated diesel buses — cleaner-burning fuel, low maintenance costs and low fuel costs — he’s pleased with the choice the district made to go with propane buses. After just one year, Liberty Public Schools has had such success with their propane buses, there are now seven more on order for the district. Increasing numbers of school districts across Missouri are recognizing that propane autogas is the right choice for their fleets because it is safe, economical and clean. And the power, availability and reliability of domestically produced propane is helping Missouri school districts be a part of a clean fuel revolution.