Conduct a massive overhaul of an aging, costly diesel school bus fleet by finding a solution that reduces fuel and maintenance costs; improves the district’s environmental impact; and provides a quieter, healthier ride for students and drivers. 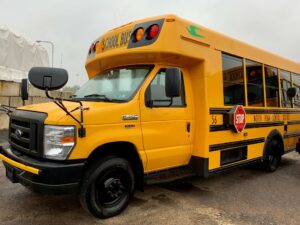 North Penn School District is located in the suburban area of Lansdale, Pennsylvania. The district serves 13,000 students across 68 campuses and runs 128 routes daily. As the district’s diesel buses were nearing the end of their lifecycle, Dennis Ryan, coordinator of transportation for the district, began the process of researching alternative fuels to help phase out older model diesel school buses.

The district sought to find a fuel that would reduce costs and improve health for students, drivers and the community. Leadership ultimately determined that propane autogas was the best match for North Penn School District because propane school buses have significantly lower fuel and maintenance costs when compared to other alternative fuel options.

In 2019, North Penn School District began integrating propane school buses into its fleet, which is a mix of district-owned and contracted buses. In just three years, the district and its contractor have transitioned over 50% of the fleet to operate on propane, enjoying a fuel savings of 75%.. While the rest are still a mix of diesel and gasoline, Ryan said the fleet is consistently being replaced with propane buses every year.

“One of the benefits of propane buses,” Ryan said, “is that students do not have to be around diesel fumes.” Propane autogas is naturally a nontoxic, non-carcinogenic and non-corrosive fuel.

Diesel exhaust, on the other hand, is identified by the World Health Organization as a carcinogen. The EPA regulates particulate matter — the soot from vehicle exhaust — because it can create serious lung and bronchial problems. The district’s propane school buses virtually eliminate particulate matter without adding maintenance burdens and additional costs, as is the case with diesel.

The Environmental Protection Agency and California Air Resources Board have eight measurements: nitrogen oxides (NOx), particulate matter, non-methane hydrobcarbons, carbon monoxide, carbon dioxide, methane, formaldehyde and nitrous oxide. The propane buses North Penn School District operates are equipped with an advanced ROUSH CleanTech fuel system, which is lower than diesel in all of those eight outputs by an average of 64%.

When making the decision to transition to propane school buses, two of the key drivers for the district were lower fuel costs and lower maintenance costs.

On average, propane autogas costs about 50% less than diesel and about 40% less than gasoline. However, North Penn School District is seeing even greater savings than that. “At $2.66 less per gallon than our diesel buses, the fuel savings with our propane buses is second to none,” said Ryan. In 2022, the rate for diesel was $3.58 per gallon; the district paid 92 cents for propane, a 75% savings.

Not only has the district recognized significant fuel savings, it has drastically reduced maintenance service and costs due to propane’s clean operation.

Propane removes the complexity and cost of after-treatment measures required with diesel vehicles since it doesn’t require additional fluids or filters; exhaust after-treatment or diesel emissions fluids; particulate trap systems; turbochargers or intercoolers. And, propane school buses have no cold-start issues, saving the district both time and money on equipment and staff.

“Propane school buses make the most sense for us. Other types of alternative-fuel school buses are cost prohibitive and do not make sense for a school district our size,” said Angelo Tornetta, technician supervisor for North Penn School District. “Propane autogas operates clean and is much cheaper than diesel or compressed natural gas, plus it costs less to maintain a propane school bus.”

North Penn School District employs over 150 school bus drivers and bus aides, along with five mechanics. With 76% of school bus routes operating on propane power, most of those employees come in close contact with the propane buses on a daily basis.

The district’s drivers say they have been impressed with the power of the new propane buses and the low noise of the engines. Buses fueled by propane reduce noise levels by about half compared to a diesel engine. North Penn School District drivers report a comfortable, quiet and smooth ride for themselves and the students, contributing to a calm and well-managed experience for everyone. “With a propane bus, I am able to monitor activity inside the bus much better than I’d ever been able to before,” said bus driver William Gottshall. “If something is going on inside the propane bus, I know about it immediately.”

In 2019, drivers were trained on how to properly drive and fuel propane buses, and they enjoy the ease of both. Bus driver Kerri Neumeye said, “The propane bus has excellent acceleration. When pulling into four lanes of busy traffic, you want the extra power this bus has.”

All of North Penn School District’s mechanics are certified to maintain the propane autogas system. They report enjoying a cleaner work environment and dealing with less oil changes. Propane fueling is a closed-loop system and, with propane, the technicians avoid the frequent spills and diesel odor on their clothes and hands. 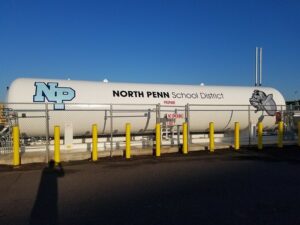 To date, North Penn School District has received $800,000 in grant funds to support its transition to propane autogas. That includes the installation of an affordable onsite 10,000-gallon propane tank and fueling station. “North Penn School District plans to continue the partnership with the Pennsylvania Department of Environmental Protection to work to transition as many buses as possible to propane-fueled vehicles,” said Ryan.

Since propane is classified as an alternative fuel by the Energy Department, there are a number of incentive programs to encourage adoption among school districts, including the 2021 infrastructure bill, government grants, Volkswagen settlement funding, market-based incentives (low-carbon fuel standards) and tax credits.

Driving into the Future

Ryan is pleased that the district is able to check all the boxes when it comes to choosing propane autogas: safe, energy efficient, domestically produced and budget-friendly.

“North Penn School District is committed to eventually having 100% of the daily fleet transitioned to propane,” said Ryan. “Ultimately, North Penn continues with this project with our students’ safety, health and education as our top priority by providing them with clean transportation.”

As more aggressive emissions regulations are put in place under the EPA’s new goals, North Penn School District’s decision to transition to propane could not have come at a better time. By operating ROUSH CleanTech propane fuel systems in its Blue Bird Vision buses, the district is one step ahead of the curve because ROUSH CleanTech is the first original equipment manufacturer to receive CARB’s 0.02 grams per brake horsepower-hour certification for 2022 model year vehicles. The optional ultra-low CARB certification is 90% cleaner than current emissions standards for nitrogen oxides.

“We will continue working toward a fully propane bus fleet to minimize our environmental impact,” said Ryan. “We look forward to driving North Penn into the future.”