By the Numbers (for current vehicles): 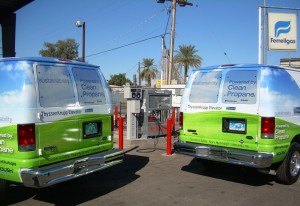 ThyssenKrupp Elevator, the largest producer of elevators in the Americas, knows the ups and downs of running a successful business. With more than 13,500 employees, 200+ branch and service locations, and more than $2.7 billion in annual sales, remaining on top means being fiscally, socially and environmentally sustainable, even during the toughest times.

In 2010, ThyssenKrupp Elevator’s fleet department started evaluating alternative fueled vehicles to explore ways to combat rising fuel costs, and to learn which fuels were sustainable now and for the next generation. Their quest resulted in the development of a protocol for analyzing alternative fueled vehicles — one that is serving as a model for other companies seeking to make the switch.

“We are challenged in today’s marketplace to go green,” said Tom Armstrong, director of fleet at ThyssenKrupp Elevator. “We were determined to reduce our fuel consumption and find sustainable vehicles that worked for us. With all the alternative fuel choices available today, we needed a tool to effectively analyze and justify each fuel or alternative fuel vehicle type.” 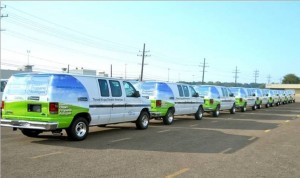 According to Armstrong, the only product that qualified for all “Five C’s” was propane autogas. “When we laid out all the fuels available, including propane autogas, ethanol, biodiesel, compressed natural gas and electric, there was only one alternative fuel source that had a check mark in all five categories, and that was propane autogas,” said Armstrong.

From well to wheel, propane autogas conserves natural resources by being a domestically produced fuel that is a byproduct of natural gas processing and petroleum refining. About 90 percent of all propane used within the United States is produced in this country. Additionally, propane autogas is safe, non-toxic and will not contaminate surface or groundwater sources in the event of a spill. Armstrong is experiencing a displacement of about 2,000 gallons of gasoline per vehicle each year by switching to propane autogas.

As for cost effectiveness, Armstrong said the average price for gasoline has hovered around $3.84 per gallon, while the company’s price for propane autogas averaged $1.93 per gallon. This alone provides more than $224,208 in annual fuel cost reductions to the company’s bottom line across the vehicles in their Phoenix market. Armstrong’s propane autogas vehicles have the potential to incur lower maintenance costs and increase the life of the engine because the fuel burns cleaner and experiences significantly less carbon build-up.

“The return on investment for our propane autogas vehicles varies city by city, based on a number of variables including state incentives, fuel costs reduction, high occupancy vehicle (HOV) lane access and registration costs. For example, our cost benefits in the Phoenix region are tied to lower fuel and vehicle registration costs, and also HOV lane access,” said Armstrong. “We have found our rate of return is roughly two to four years per vehicle. With an estimated six-year vehicle life, we have at least two years of positive return on our investment per vehicle.”

With so many pluses, common sense pointed the company to commit to propane autogas. They started with three ROUSH CleanTech Ford E-150 propane autogas vans in Phoenix in 2010.

Stepping Aboard with ROUSH CleanTech

The path to propane autogas was methodical and well researched by ThyssenKrupp Elevator. The fuel met all the needed requirements, but as the company started its migration away from foreign oil, a new set of concerns arose.

“Once we decided on propane autogas, our next challenge was to identify the best partner for our propane conversions,” said Armstrong. “We needed a quality tier-one supplier committed to our long-term sustainable goals, which meant the product needed to be safe, and it needed to be supported by the vehicle manufacturer and not void of any manufacturer warranties. ROUSH CleanTech surfaced as our best solution and business partner.”

Today, ThyssenKrupp runs 47 ROUSH CleanTech Ford E-series vans and seven F-series trucks across five geographic markets: Phoenix, Seattle, Los Angeles, San Diego and Detroit. According to Armstrong, they are targeting Dallas, Houston, Sacramento and San Francisco next, and will continue to add new vehicles and markets with the goal of operating 10 percent of their entire fleet on propane autogas by 2015.

“When we first started out, we were looking to reduce the company’s carbon footprint by 20 percent by the end of 2015, with an interim goal of 12 percent improvement in fuel efficiency by 2012” explained Armstrong. “We have already met both of those goals and couldn’t be more pleased with how propane autogas is performing for us.”

At ThyssenKrupp Elevator, company drivers are assigned vehicles that are taken home each night and always available for customer emergencies. Refueling infrastructure has to be strategically placed for their needs.

“Since our vehicles go home with our drivers, we needed adequate local fueling infrastructure for each city where we use propane autogas,” said Armstrong. The process includes entering the home address of each driver into a system and mapping out exactly where propane autogas fueling sites are needed. ThyssenKrupp researches various fuel suppliers that provide infrastructure in each area. In most situations, suppliers have area retailers where existing refueling equipment can be upgraded to include 24-hour accessibility, driver-operation, and credit card capability. These features give drivers the convenience and ease-of-use just like refueling with conventional fuels.

ThyssenKrupp Elevator has implemented many other green initiatives, such as using GPS dispatching for service vehicles to minimize mileage and improve customer response times, providing urea-formaldehyde-free elevator cab interiors, and developing regenerative-drive technology that uses gravity to regenerate energy and feed it back into the building.

According to Armstrong, the company is committed to leaving behind a sustainable future for generations to come by operating a green fleet that minimizes impact on precious natural resources, conserves financial outputs related to fuel costs, and builds a foundation for moving their successes to other markets they serve.

“Propane autogas is quickly becoming the gold standard by which other alternative fuels are measured,” said Joe Thompson, president of ROUSH CleanTech. “Fleets across North America are deploying propane autogas vehicles because they make economical and environmental sense.”