With a goal to lower their emissions and total operating costs, two Washington transit agencies sought an alternative fuel solution for their paratransit shuttles.

Making the Switch to Propane

Whatcom Transportation Authority provides public transportation services throughout Whatcom County in the northwestern corner of Washington. Its services include fixed routes, paratransit, zone service and a vanpool program. The agency has 62 fixed-route buses and 47 paratransit buses. 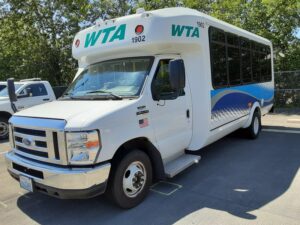 “Kitsap Transit strives to be a sustainable, green travel option for our environmentally conscious commuter base,” said Dennis Griffey, maintenance director for Kitsap Transit. “By choosing propane shuttles for our paratransit vehicles, we’re doubling down on our commitment to our community.”

For Whatcom Transportation Authority, reducing its carbon footprint was an important factor in replacing its paratransit vehicles.

“Whatcom Transportation Authority is on a mission to reduce greenhouse gas emissions that drive climate change,” said Ron Mountain, fleet manager for the agency. “Transitioning our paratransit fleet to propane is one of the most effective ways we can reduce our emission footprint.”

Griffey pointed out that transportation sector is one of the largest contributors to greenhouse gas emissions. “Kitsap Transit is committed to environmentally sustainable practices in its own operations,” said Griffey. “Since 2013, Kitsap Transit has made operational changes, including using propane vehicles, that have reduced our carbon-dioxide footprint by more than 7.2 million cubic feet which is equal to 375.5 metric tons — nearly 5% decrease overall.”

Propane vehicles are known to be easy to maintain and reliable to operate. They lower maintenance costs, including fewer quarts of oil required, fewer oil changes, and less costly filter packages.

“Propane has reduced our maintenance costs and wear and tear on the engine and components,” said Griffey. “We don’t need to do as much serving for fluids, coolants and filters.” He adds that the agency’s propane autogas transit buses average 25 cents less per mile than its comparable diesel vehicles.

Whatcom Transportation Authority had some initial maintenance issues; the agency worked with ROUSH CleanTech to replace the fuel pumps.

Compared with other fuels, propane also has the lowest total cost of ownership. In addition to reduced maintenance, the fuel is 40% less expensive than gasoline and about 50% less than diesel per gallon. Additionally, propane excels in operating in cold weather.

“Being in the Pacific Northwest, we endure some rough winter conditions. Whatcom Transportation Authority’s propane shuttles don’t have any cold-start issues and warm up quickly. That saves our team time and money,” said Mountain.

Requirements for a propane vehicle repair facility are generally the same as those for conventionally fueled vehicles, helping fleet managers keep costs low compared with other alternative fuel facilities.

Kitsap Transit and Whatcom Transportation Authority experience additional savings with their propane shuttles by locking in an annual per-gallon fuel cost for propane to ensure price and supply remain consistent.

Kitsap Transit has two 2,000-gallon dispensers at its North and Charleston facilities, as well as one 1,000-gallon leased dispenser at its South facility. The agency reports it saves almost 70% per gallon when purchasing fuel for its propane shuttles, compared to its diesel shuttles.

Whatcom Transportation Authority has three 1,000-gallon dispensers on its property to accommodate its propane fleet.

“Our employees fill up onsite. That, plus the facts that propane is produced domestically and has an abundant supply, allows us to budget better,” said Mountain.

More than 90% of the United States propane autogas supply is produced domestically, with an additional 7% from Canada. Fueling with American-made propane autogas helps with energy security goals and reduces the nation’s dependence on imported oil.

Feedback from the Drivers

Drivers have noticed many improvements while operating the propane shuttles.

“Our operators really appreciate the power and the pep the propane vehicles have. They are quieter and don’t have that diesel smell,” said Griffey.

Vehicles fueled by propane autogas reduce noise levels by about 50% compared to a diesel engine, allowing drivers to better focus on passengers and the road.

Some of Whatcom Transportation Authority drivers expressed concern about operating the vehicles in warm weather. “ROUSH CleanTech worked with us to help eliminate ‘vapor lock’ in warm weather, which satisfied our drivers,” said Griffey. Vapor lock is caused by a liquid fuel, such as propane, changing state while still in the fuel delivery system.

In order to transition their fleets to propane, Kitsap Transit and Whatcom Transportation Authority utilized local, state and federal funding to purchase their buses and trucks. Both agencies tapped into Federal Transportation Administration (FTA) grant programs for support.

Both Kitsap Transit and Whatcom Transportation Authority plan to add more propane vehicles to their fleets. According to Mountain, every future paratransit order for Whatcom Transportation Authority will be propane-fueled. And, Griffey says that Kitsap Transit will replace all of its remaining 6.6-liter diesels with the 7.3-liter low nitrogen oxide Ford E-450 propane cutaway vehicles.

“We were looking for cleaner emissions, reduced down time and lower cost per mile,” said Griffey. “ROUSH CleanTech’s propane-fueled E-450s achieved all these goals.”