Did you know that propane autogas powers more than school buses? In fact, you may be surprised to find out that it’s used in drag racing, too. For almost 10 years, racers Susan Roush-McClenaghan and Donnie Bowles have used cutting-edge engine technology to win races with propane. 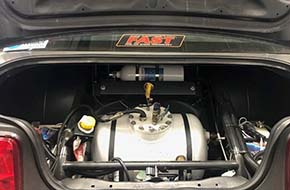 And, they win with no sacrifice racing against traditional fuels in an “open fuel” class. They’ve racked up numerous championships — proving that propane doesn’t compromise performance.

“The class we race in is ‘open fuel’ so it’s propane competing against other race fuels or traditional fuels with no handicapping of the fuel,” said Roush-McClenaghan. “It’s just fuel to fuel.”

Roush-McClenaghan and Bowles both drive Ford Mustangs with Coyote engines at a staggering 890 horsepower with two fuel injectors per cylinder and a supercharger.  Propane has such a high octane rating that there’s only a four-horsepower difference between propane and C14 (race fuel). The racers can reach 150 mph in just 9.19 seconds!

Even though a school bus won’t reach those rates, they do share many of the same attributes as their motorsport counterparts. Both the racecar and the Blue Bird Vision propane engines use liquid propane injection with a base Ford engine and, in some cases, share the exact same components.

Roush-McClenaghan supports the use of propane because it is clean and domestically produced. And she and Bowles have multiple wins to back it up. In just nine years of racing they have brought in eight championships, with four each. Currently, Susan is in first place for this season!