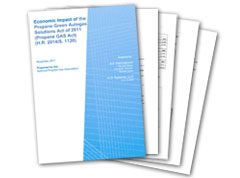 LIVONIA, MICH. (January 10, 2012) — ROUSHCleanTech, a leading manufacturer of propane autogas fuel systems, and its customers applaud the findings of an independent analysis that confirms the Propane Green Autogas Solutions (GAS) Act of 2011 (H.R. 2014/S. 1120) would create a substantial economic boom to the U.S. economy. According to the study, passage of the legislation could create up to $5.7 billion dollars per year in new economic activity and 42,000 net new jobs in the U.S. over the next five years.

ICF International, a leading provider of consulting services and the author of the study, applied standard economic modeling and analysis techniques to evaluate how the policy would impact the American economy. From 2012 through 2021, this legislation would generate an increase in economic activity of up to $29 billion and, during the same period, diminish crude oil and petroleum imports by 83 to 117 million barrels. This would be accomplished while creating no net cost to taxpayers and while reducing emission of harmful environmental pollutants from fleet vehicles across the country, according to the study.

“With presidential election activities heating up, the issue of job creation and the economy is plastered across the news headlines every day. Right now, Congress is holding the key to legislation that could drive significant economic activity in our country, and that key is passage of the Propane GAS Act,” said Joe Thompson, president of ROUSH CleanTech. “Extending these tax incentives is critical to providing solutions to three important issues dominating the headlines; job creation, stimulating economic growth, and delivering on energy security through the use of a domestically produced alternative to gasoline and diesel.”

Considered a simple extension of existing law, the Propane GAS Actaims to extend provisions found in both the 2005 Energy and 2005 Highway Bills that established tax incentives for propane autogas. The incentives would help cover the incremental cost to convert a vehicle to run on propane autogas, cover 50-cents per gallon for every gallon pumped using on-site refueling infrastructure, and help cover some of the cost to expand refueling infrastructure around the nation.

“There were great government incentives to assist with the incremental cost of conversion and a 50-cent per gallon incentive to assist with fueling, but they’re now expired,” said Tom Hopkins, department head of logistics for Wright & Filippis, the nation’s largest family-owned home medical equipment distributor and a ROUSH CleanTech customer. “These opportunities assisted Wright & Filippis to do the right thing environmentally with a cost-effective, domestically produced alternative fuel. The Propane GAS Act would bring back incentives like these and lead more fleets like Wright & Filippis to reduce their emissions with propane autogas.”

While propane autogas is projected to cost at least 30 percent less per gallon than gasoline for the next 25 years, the incentives found in the Propane GAS Act have been the determining factor for many fleet managers looking to transition away from conventional fuels. According to the ICF International study, the cost to the federal government for the Propane GAS Act will be “more than offset by the increased tax revenues at the federal, state and local government level.”

“We are challenged in today’s marketplace to go green,” said Tom Armstrong, director of fleet at ThyssenKrupp Elevator, the largest producer of elevators in North America. “When we laid out all the fuels available, there was only one alternative that checked all the boxes, and that was propane autogas.Passage of the Propane GAS Act would make adopting propane autogas technology an even more desirable choice for fleets across the country.” ThyssenKrupp Elevator has used ROUSH CleanTech propane autogas vehicles in their fleet for more than a year.

Last year, President Obama and the Department of Energy outlined specific environmental and energy security objectives for U.S. fleets. Intended to be a resource to stimulate adoption of domestic-based alternative energy such as propane autogas, the President created the National Clean Fleets Partnership. With 90 percent of U.S. propane supplies produced domestically — and an additional seven percent from Canada — passage of the Propane GAS Act would improve U.S. energy security while working to meet the Administration’s goals through the reduction of greenhouse gas emissions by up to 25 percent compared to gasoline.

With up to 56,000 miles of pipeline, more than 6,000 retail dealer locations, and thousands of fueling stations across the nation, propane has strong transportation and distribution infrastructures and sufficient domestic fuel supplies to meet foreseeable consumer demands.

“If the leaders of our country want fleets to take action in achieving national goals for environmental sustainability and energy independence, they need to help put companies on the right track,” said Thompson. “Winning the race for energy independence can be done with a budget-neutral proposition — and is something any good American would volunteer to do. The ICF International study shows how the Propane GAS Act can get it done.”

To read the full report, visit Economic Impacts of the Propane Green Autogas Solutions Act of 2011 or visit www.roushcleantech.com/content/icf-study.