Propane Autogas Reduces Emissions, One Gallon at a Time

Propane is a low-carbon alternative fuel that produces significantly fewer greenhouse gas emissions than electricity and many other fuels. According to the Intergovernmental Panel on Climate Change, propane autogas is not a direct greenhouse gas when released into the air, and current research measurements have found no global climate impact from propane autogas emissions.

What does that mean for fleet operators and vehicle owners? When compared to conventional fuel sources, propane generates fewer greenhouse gas emissions in almost every application — including as an automotive fuel. Tank by tank, propane autogas has a lower carbon content than gasoline, diesel, heavy fuel oil, or even biodiesel and ethanol.

When quantifying the greenhouse gas emissions that result from the use of energy, it is important to distinguish between the emissions released at the location where the energy is consumed and the emissions released as a result of extracting, processing, and delivering a refined and usable energy product to that location. The fuel lifecycle begins where the raw feedstock is extracted from the well or mine and ends where the fuel is consumed to power a vehicle, appliance, or other technology.

The carbon footprint of propane autogas is relatively small compared to other fuels in terms of total emissions and emissions per unit of energy consumed.

Figure 1 shows the relative carbon dioxide emission rates for various fuels. With the exception of natural gas, propane autogas has the lowest emission rate of the major energy sources. Electricity is included in this chart based on the average U.S. emissions of the power generation industry. 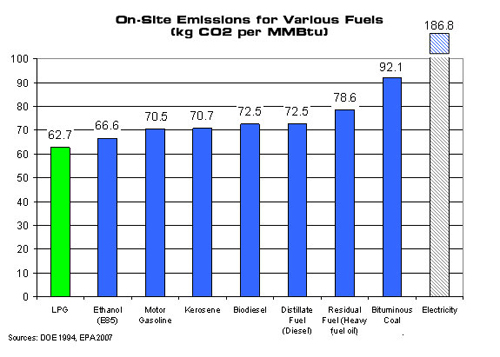 Energy use is not the only source of upstream emissions. Other production processes also release greenhouse gases. For example, the growing of crops for the production of biofuels requires the application of nitrogen fertilizer, which causes the formation of nitrogen oxide. Additionally, natural gas refining causes the release of fugitive emissions of methane. These processes have been quantified by GREET, the Greenhouse Gases, Regulated Emissions, and Energy Use in Transportation model, making it a creditable comparison of lifecycle analyses of fuel systems.

Propane autogas, one of the cleanest burning fossil fuels, is an approved, clean fuel listed in the 1990 Clean Air Act and the Energy Policy Act of 1992. Tests conducted by the U.S. Environmental Protection Agency show that propane autogas vehicles can produce 30 to 60 percent less carbon monoxide emissions, 80 percent reduction in exhaust coarse particulate matter, up to 95 percent reduction in evaporative volatile organic compounds, and approximately 50 percent fewer toxins and other smog-producing emissions when compared to gasoline engines.

Propane autogas is a clean-burning fuel that is environmentally friendly. Try our Savings Calculator & Emissions Calculator to calculate your potential savings.

Here are some of the proven emissions benefits of propane autogas:

For more information on propane emissions: