To exemplify Delaware state environmental leadership by building a public alternative-fuel fleet that is cost effective. 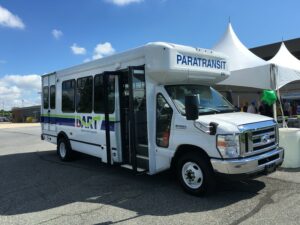 Delaware Transit Corporation provides over 10.6 million rides per year, including about 1 million passenger trips through its DART paratransit service. The transit agency runs a shared-ride program with advanced reservation trips for people with disabilities who are unable to use regular fixed-route public transportation.

The agency, which operates the largest self-managed paratransit fleet in the nation, took on a two-year pilot program testing five propane autogas paratransit buses in 2014. The agency chose to pilot two different types of vehicles, dedicated (only operating on propane) and duel fuel (operating on gasoline or propane).

This propane vehicle has completed Federal Transit Administration’s New Model Bus Testing Program (“Altoona Testing”) and is certified for sale in all 50 states by the California Air Resources Board and Environmental Protection Agency.

“Our first five propane-fueled buses collectively traveled 450,000 miles with no fuel system-related failures, and saved $15,000 in fuel costs alone,” said John T. Sisson, chief executive officer of Delaware Transit Corporation. “That, combined with the reduction in greenhouse gas emissions, made it an easy decision to expand the propane program with our new private fuel stations and expansion of the propane fleet.”

The propane autogas paratransit buses are each emitting 91,000 fewer pounds of carbon dioxide emissions over its lifetime compared to the agency’s gasoline models — or 15 million pounds for the entire propane fleet. Propane autogas is a low carbon fuel that reduces greenhouse gases by up to 25 percent, with 60 percent less carbon monoxide and fewer particulate emissions compared with gasoline.

In March 2018, savings averaged $76 per bus per week. The Delaware Transit Corporation is saving about $11,000 per week by operating a propane autogas paratransit bus fleet, equaling more than $500,000 annually in fuel expenses alone. The agency has calculated a 36 percent cost per mile fuel savings, with 19 cents for its propane shuttles compared with 30 cents for its gasoline shuttles. Historically, propane autogas costs 40 percent less than gasoline and up to 50 percent less than diesel. 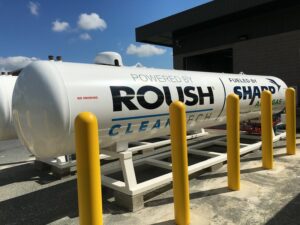 According to Walters, the agency drivers have found the switch to propane to be an “easy one, and have commented that the only difference is propane autogas has better acceleration and more power than gasoline or diesel.”

DART tested both dual fuel and dedicated propane autogas vehicles before making the decision to purchase only dedicated vehicles. “We found the dedicated system far superior to the duel fuel system,” said Walters, who recommends that other transit agencies learn from their experience.

Delaware Transit Corporation is realizing the economic and environmental savings that come with adopting propane autogas. And, the agency expects that momentum to continue as it plans to convert its entire paratransit fleet to propane autogas by 2020.