To find an economical replacement to diesel and serve as an environmental leader among mass transportation agencies. 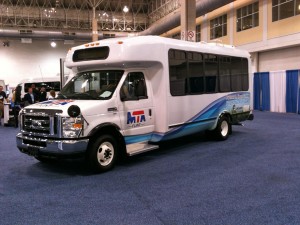 Each year, Flint Mass Transportation Authority (MTA) transports nearly 470,000 passengers through its paratransit service. Seniors, persons with disabilities and the general public rely on the MTA’s “Your Ride” curb-to-curb shuttle bus service within the City of Flint and Genesee County. As the fleet of shuttles aged, the MTA took the opportunity to explore alternative fuels.

Flint MTA’s decision to explore alternative fueled vehicles maintained an underlying mission: Provide sustainability for the future, both economically and environmentally. During its extensive research, the agency examined many factors, including refueling needs; vehicle availability and warranty; rider requirements; and the fuel itself. The MTA also considered that fuel systems designed by companies with Ford Qualified Vehicle Modifier (QVM) status would retain the original factory Ford warranty, an important factor for the agency.

In 2010, Flint MTA received a Federal Transit Administration (FTA) grant through the “State of Good Repair Program” to purchase natural gas buses. This program funds the maintenance and upgrading of vehicles to ensure that the nation’s public transit “operates safely, efficiently, reliably and sustainably.” It provides 80 percent funding with a required 20 percent match. 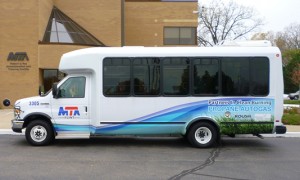 Flint MTA selected the Ford E-450 cutaway equipped with the ROUSH CleanTech propane autogas fuel system. The versatility of the vehicle platform allowed the agency to enhance its bus features, including more passenger and wheelchair capacity. The 41-gallon fuel tanks provided the range required. As a Tier 1 supplier and Ford QVM manufacturer, ROUSH CleanTech’s vehicles retain both the original factory Ford warranty and the same quality Ford performance characteristics, such as horsepower, torque and towing. And the Environmental Protection Agency and the California Air Resources Board certify the shuttles.

The agency received its first vehicles in 2011 and currently operates 37 propane autogas buses, with 35 more planned for delivery by early summer 2013. Once all 72 shuttles are in operation, the agency will hold the distinct honor of operating the nation’s largest propane autogas fleet in the public transit industry.

“Propane autogas is the ideal fuel to drive down operational costs and to carry out our commitment to reducing our exposure to unstable imported fuel prices,” said Benning. “And the vehicle performance has been excellent.”

Saving at the Pump

At the pump, Flint MTA saves time, too. At eight gallons per minute, MTA drivers find refueling time quicker when compared to their conventionally fueled shuttle buses, which refuel at about five gallons per minute.

For refueling convenience, the agency installed two propane autogas stations. And last year, Flint MTA broke ground to install an alternative fuel facility in Grand Blanc Township. The first of its kind in Michigan and one of only two in the country, the station offers hydrogen and compressed natural gas in addition to propane autogas.

These successes have led Flint MTA to plan for more alternative fuel growth, with a goal of 60 percent reduction in diesel usage by 2018. By the end of 2013, the MTA will operate five propane autogas fueling stations and purchase 20 more minibuses for a total of 92 propane autogas vehicles. Their next phase will include opening a publicly accessible alternative fuel station and building a community alternative fuel training facility. Future plans also incorporate static fuel cell units to heat and electrify the agency’s storage facilities.

“We constantly receive inquiries from across the nation and even internationally about our propane autogas program and our alternative fuel facility,” said Benning. “We’re glad to be an important and leading part of the alternative fuel movement among transit agencies.”

About Flint Mass Transit Authority: The Flint Mass Transportation Authority is the agency authorized to provide public transportation services in Flint and Genesee County in Michigan. The MTA’s services include primary fixed routes, peak routes (running only during designated times) curb to curb service (known as “Your Ride”), specialized services for the elderly and persons with disabilities, and maintenance of the Flint Transportation Center, Community Services Centers, Greyhound and Amtrak Rail Station in Flint.