Located in the heavy traffic area of the Atlanta suburbs, Henry County Schools transports 24,000 students on about 300 routes daily. For years the district has focused on reducing its environmental impact and promoting better health for its students, an initiative that led to a 2018 “Green Ribbon School” award from the Department of Education.

The district’s board of education decided to take a closer look at alternatively fueled school buses after realizing the complex parts and extensive maintenance required to meet emission standards with its diesel buses. Another incentive came from a district financial policy. “Our superintendent is very intentional, making sure any transportation department savings go back into student education, equipment and the purchase of more buses for future use,” said Cliff Shearouse, Henry County School’s transportation director. 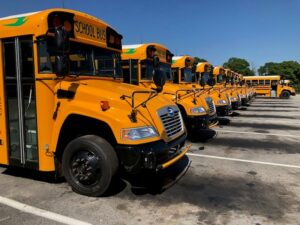 The district first purchased 14 gasoline-powered buses, then made the move in 2019 to propane models. Henry County Schools’ decision was supported by reports of positive experiences with propane from nearby Georgia school districts in Fulton County, Hall County, Bibb County and Paulding County. In addition, Houston County purchased both propane and compressed natural gas (CNG) buses, and found propane to be a better choice, Shearouse said. Henry County Schools’ decision to go with propane was solidified when ROUSH CleanTech, the propane fuel system manufacturer, hosted a group of district staff at its facility in Livonia, Michigan.

“After seeing their technology and how it works, the maintenance on the buses, and what goes into the fuel itself, it was obvious to us that propane was a great fuel choice,” Shearouse recalled.

Henry County Schools purchased 23 Blue Bird Vision Propane buses to replace aging diesel buses. The propane buses rolled out for the start of the 2019-2020 school year.  “We have been a Blue Bird customer for years and it’s important we stay in touch with their growth and technology,” Shearouse said.

Choosing propane buses led to fueling discussions. With a limited number of public stations in the vicinity, Henry County Schools decided to build a propane fueling station at its onsite transportation facility.

The administration sent out a request for proposal to identify vendors for the infrastructure and fuel. “We were able to work with our vendor to incorporate growth since we anticipate an all-propane fleet in the next 10 years. Our fueling station had to be capable of scaling up,” Shearouse said.

It costs less to build a propane station than any other fuel source, including diesel, gasoline, CNG and electric. Superior Energy Systems (SES) provided the district’s fuel infrastructure, which included two propane autogas dispensers and an 18,000-gallon skidded tank. SES’ equipment was compatible with the district’s existing fueling infrastructure set-ups. The district now has three fuels — diesel, gas and propane — on site.

With the addition of propane buses to its fleet, Henry County Schools cuts harmful emissions and greenhouse gases, which benefits both student health and the community’s air quality. Clean-operating propane produces no particulate matter and extremely low levels of nitrogen oxides (NOx), and emits fewer greenhouse gases and smog-producing hydrocarbons. At 0.05g, the propane engine is 75-percent cleaner than the current Environmental Protection Agency’s most stringent 0.2 g/bhp-hr heavy-duty engine standard.

Henry County’s propane buses emit 500 fewer pounds of particulate matter per year and about 19,000 fewer pounds of NOx annually compared to the 23 diesel buses they replaced (which were 1995 to 2006 model years). A 2019 study from the nearby Georgia State University found diesel school bus fumes drive down test scores. The study correlated increased academic performance when children are exposed to lower levels of school bus emissions.

While changing to alternative fuels was not a state mandate, Henry Country Schools were able to tap into funding. “Propane buses do cost a little more than a standard diesel buses up front and we were able to get two different grants to help pay for the buses,” Shearouse explained. The district secured $104,000 in grant money to offset the cost of propane buses.

Shearouse also noted the financial advantages to quick bus starts. “We don’t deal with weather colder than 20 degrees, but we’ve heard that propane school buses start quickly on a cold day or a hot day. No cold-start issues saves both time and money,” he said.

On the Road for the Long Haul

As propane buses roll out in Henry County, drivers are happy to make the switch. “The drivers’ initial response was how quiet the buses are. It makes for a more peaceful bus,” Shearouse said. The drivers received training on how to operate the propane buses and commented on the buses’ powerful engine.

The schools’ entire transportation department expects the buses will be reliable for the long haul. “These are Blue Bird buses, and we have been a Blue Bird district for years, so we know they will last,” Shearouse noted. “Plus, once district technicians visited ROUSH CleanTech for technical training, they were sold on the idea.”

To other school districts considering propane, he advised, “Make sure you have your request for proposal for your infrastructure and fuel correct — not just the number of propane buses you have now but your plans down the road.” The district plans to replace all of its buses to propane over the next decade.

About Superior Energy Systems, Ltd.: For more than 40 years, Superior Energy Systems has brought together engineering, manufacturing, construction and safety expertise to focus on operational excellence. We provide the best in turnkey LPG and NGL systems and infrastructure solutions as well as safety and compliance training. We have manufactured more bulk plants and trans-shipment terminals throughout the United States than any other company and have over 1,100 autogas dispensers located across North America. In addition, we design, engineer, construct and service vaporizers and mixers, rail towers, metering and odorant skids and stand by fuel systems. Visit us at our Cleveland headquarters or learn more at SuperiorNRG.com.