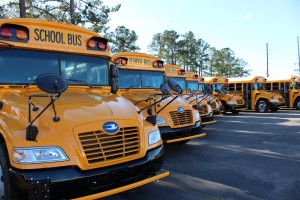 This month, we helped Blanchard Bus Centers organize a propane school bus event in South Carolina. The state operates one of the oldest school bus fleets in the country with buses averaging 15 years old — some dating back to the 1980s. Blanchard helped make a dent in replacing old diesel buses with new propane-fueled models. The event let the folks of South Carolina know that cost-saving, emissions-reducing buses are now transporting their children.

A couple months in advance, the Blanchard team coordinated with folks from Blue Bird corporate and ROUSH CleanTech to organize the event. The Blue Bird dealership was instrumental in determining the event’s date and location and reaching out to dignitaries to attend and speak at the event. Blue Bird and ROUSH CleanTech stepped in to get the word out and get the media to take notice.

A few days before the event, we distributed a media alert with details to entice local media to attend the school bus unveiling. Along with logistical details, the media alert provided a sneak peek about the event, including the buses’ significance, the list of speakers and the opportunity to take a ride in a propane bus. 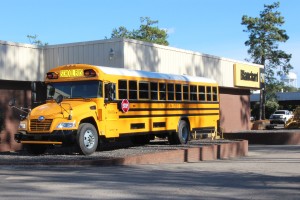 We then personally reached out to reporters to explain why this event was important for them to cover. This outreach was instrumental in the success of the event. It was well attended by newspaper and television reporters — with cameras in tow. Before the event, we arranged a radio station interview that aired early in the morning, and a reporter for a local television station showed up at 4:30 a.m. at Blanchard to broadcast live pre-event coverage.

We then distributed a press release immediately following the event to reach trade publications and local media members who were unable to attend.

Here are just a few of the stories generated from this public relations campaign: